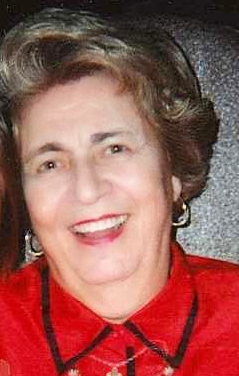 Please share a memory of Joanne to include in a keepsake book for family and friends.
View Tribute Book

The climb of her earthly life having become too steep, Joanne N. ("Nancy") Oshinskie passed quickly and peacefully into the next life on the morning of January 5, 2023.

Nancy was born in Philadelphia in 1928 and grew up in the hilly coal town of Shamokin, Pennsylvania. Tuberculosis claimed her mother, Ellen Eckman, when Nancy was three years old. She and her brother, Dick, were raised by a series of warm, loving aunts and a stepmother and by her father, John D. Williams.

Nancy often credited her long life to all of the walking she did up and down those steep hills. She also played youth basketball, loved to swim and dive in the local pool and was a graceful dancer who learned by doing at the weekly live band dances in the region where she was raised.

In 1951, she married her high school classmate, main dance partner and husband of 72 years, Leonard. They moved together to exotic Louisiana, where Leonard was stationed in the Army. After two years down south, they returned on two-lane country roads to Shamokin, where their first child, Leonard, Jr. was born. Two years later, Nancy and Leonard moved to Paterson, NJ, where Leonard found work as an electrician. There, she gave birth to Denise, moved the family to Oakland and gave birth to Mark and Danny.

Although she scarcely remembered her own mother, Nancy learned enough from her aunts and stepmother and was sufficiently skillful and devoted that she was able to raise an intact, mutually supportive, fun family. It was her crowning achievement.  Based on her inspiration, each of her children have, with spouses Doreen, Greg, Ellen and Lynda, raised families of their own. Nancy was a lively, fun grandmother to eight: Lauren, Ben, Kevin, Emily, Lena, Ali, Cammi and Ryan.

Nancy was a person of abiding integrity, cheerful, a good listener and was widely liked; she built lifelong friendships with many women. She enjoyed crafting, playing the organ, tap dancing and, after working for ten years as a purchasing agent, cared for ailing family members and a wide array of others during her retirement, until her husband, Leonard, took awesome, loving care of her up to her final day.

Despite the challenges of her last few years, she remained happy until the end of her life. She is welcomed into God's Kingdom, and will be missed.

Nancy's life will be celebrated at Messiah Lutheran Church, Oakland, NJ on January 21 at 11:30. In lieu of flowers, donations can be made to the Church.

Share Your Memory of
Joanne
Upload Your Memory View All Memories
Be the first to upload a memory!
Share A Memory