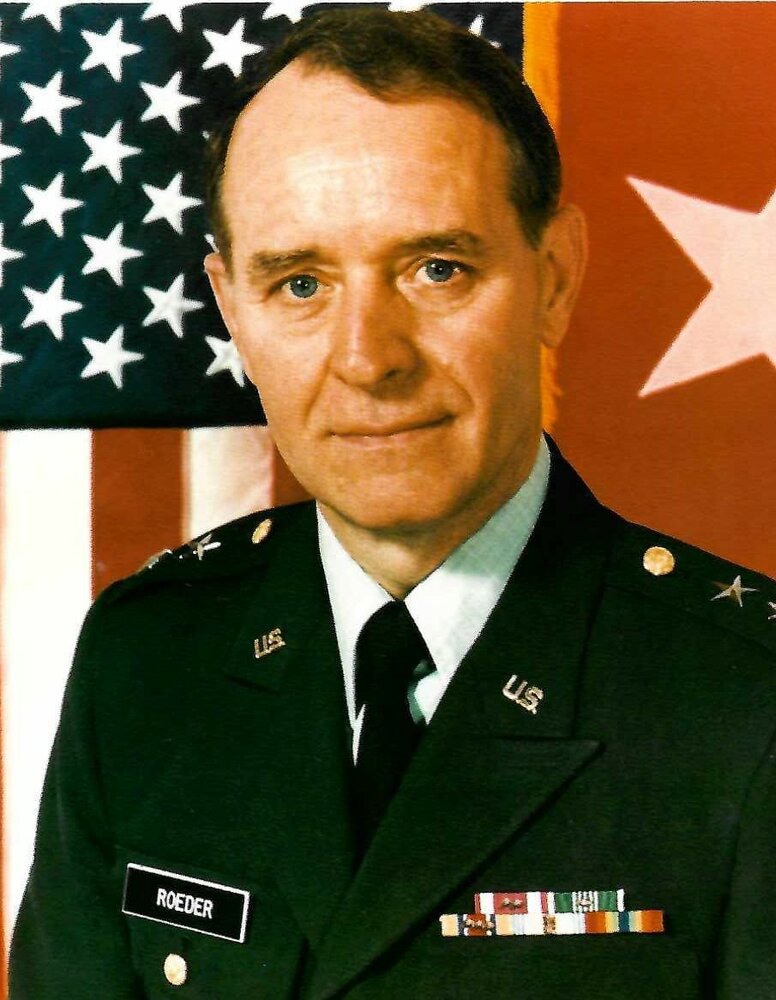 Please share a memory of Fred to include in a keepsake book for family and friends.
View Tribute Book

MG Frederick W. Roeder received his final orders from the Lord Himself, who called him home on June 22, 2022 after a brief illness.  Fred was born to Theresa C. Roeder and Frederick G. Roeder at home in Paterson, NJ on March 4, 1936.  He was educated at Mt. Carmel School in Ridgewood, NJ and Ridgewood High School, where he met the love of his life, Janice M. Hacking, to whom he was married for over 64 years.  Fred was a talented violinist, studying in New York City and attaining first seat in the N.J. Allstate Orchestra.  He received a B.S. in Industrial Engineering from Lehigh University under an ROTC scholarship and received his commission in the US Army in 1957 as a Second Lieutenant.  Upon release from active service, he joined the 78th Division Reserve and rose rapidly through the ranks, ultimately completing his service in 1992 at the rank of Major General and Commander of the 78th Division (reserve).  In civilian life, Fred worked as operations manager of a number of companies in New York and New Jersey.  He retired from Credit Services of America as Sr. Vice President and then began a post-career as Director of The Foundation for the Handicapped, a sheltered workshop in Wayne, NJ.  Fred loved the workers there and valued their talents and contributions.  He is survived by his beloved wife, Janice, sons Jeffrey F. (Barbara) Roeder of CT and Christopher R. Roeder of NJ, and grandchildren Theresa A. Roeder, Stefan T. Roeder, Jacqueline M. Roeder, and Josef T. Roeder.  A truly outstanding individual, Fred was a man of courage, determination and deep faith in his Lord and Savior.  His extraordinary leadership skills and genuine compassion for others were a unique combination, and he made it his personal goal to help many achieve their aspirations.  He will be deeply missed.

Major General Frederick W. Roeder was commissioned as a second lieutenant in the US Army Reserve and served two years active duty as a Platoon Leader with a Strategic Army Corps company at Fort Bragg, NC.  Upon his release from active duty General Roeder joined the 78th Division (Training).

In October 1980, General Roeder joined the Division Command Group at Camp Kilmer, NJ as Assistant Commander (Training) and was selected as the Assistant Commander (Support) in July 1984 where he was promoted to Brigadier General.  General Roeder was appointed Commander of the 78th Division (Training) in July 1987 and promoted to Major General on June 16, 1988.  In January 1990 he was appointed by the Secretary of the Army to the Army Reserve Policy Committee, serving as its principal member for 1st US Army, which required many trips to the Pentagon.  During the years 1990 and 1991, under his command, the Division mobilized many units and personnel in support of Operation Desert Shield/Desert Storm.  In addition it trained many Reserve and National Guard personnel as they were mobilized and passed through Ft. Dix before deployment.

General Roeder was a graduate of the Army Command and General Staff College, Ft. Leavenworth, KS and the Army War College at Carlisle Barracks, PA.

General Roeder passed the command of the 78th Division and retired from the US Army Reserves at Ft. Dix on April 5, 1992 after 35 years of military service.

Share Your Memory of
Fred
Upload Your Memory View All Memories
Be the first to upload a memory!
Share A Memory