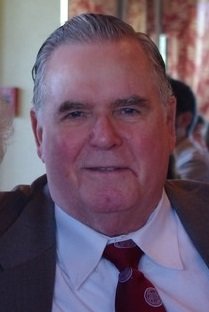 Please share a memory of Thomas to include in a keepsake book for family and friends.
View Tribute Book
Thomas (Tom) McKenzie, 85, of Bloomingdale passed away on December 22, surrounded by his family. A devoted teacher and lifelong learner, Tom taught Latin and Spanish for forty-one years, first at St. John’s Cathedral High School in Paterson, then at Ramapo High School, and finally at Indian Hills High School where he served as Chair of the Modern Languages Department. Tom also aimed throughout his life to be an embodiment of Franciscan ideals, and was an active member of Saint Mary’s Church in Pompton Lakes for the latter fifty years of his life. While working as a teacher, Tom was additionally active in civic leadership roles. In 1974 he was elected to the Bloomingdale Borough Council, and in 1976 he was unanimously elected Borough Council President. He also served as chairman of the Public Works Commission, and in that capacity his work was instrumental in obtaining the first written contracts for sanitation and road department workers. Upon retirement, Tom devoted himself to his church and community, serving as a tireless advocate for those suffering from misfortune or oppression. Through his church he taught English-as-a-second-language classes, populated with immigrants from Latin America, Russia, China, and many Eastern European countries. In his years working in this capacity, he reached out to many immigrant families in ways that went far beyond his teaching duties. This included volunteering his energies to translate and write letters, help navigate immigration and legal issues, seek out financial resources, and assist with a diverse variety of day-to-day concerns. Additionally, he served as the leader of the Family Readiness Group for the Jersey City Armory unit of the New Jersey National Guard, which offered support to troops deployed in Iraq. By those closest to him, Tom will also be remembered for his interest in languages and books, his love of Notre Dame football and Gonzaga basketball, and for the joy he found in spending time with his children and grandchildren. Tom leaves behind Dalia, his loving wife of 60 years; his three children Thomas, Michael, and Steven; his grandchildren Esteban, Drae Anne, Stephania, Diego, Tommy, and Ryan; and his great-grandchild Camila. Due to the coronavirus, the family will have a small private interment ceremony. In lieu of flowers, the family asks that you make donations to the food bank at St. Mary’s Church in Pompton Lakes, and that you keep in your heart the words of St. Francis of Assisi: “Remember that when you leave this earth, you can take nothing that you have received...but only what you have given; a full heart enriched by honest service, love, sacrifice, and courage.”
Print
Wednesday
30
December

Look inside to read what others have shared
Family and friends are coming together online to create a special keepsake. Every memory left on the online obituary will be automatically included in this book.
View Tribute Book