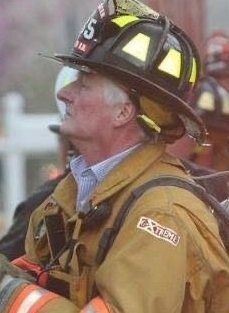 Peter Martin Pfeiffer was born on October 29th, 1947 to Elizabeth and Oscar Pfeiffer in Hoboken New Jersey.  He was married to Karen (Donovan) for 46 years and had two daughters, Jennifer and Deborah.  He was an Army Veteran, having served in Vietnam and was a volunteer firefighter for over 45 years for the Oakland Volunteer Fire Department and the Ridgefield Park Volunteer Fire Department.  Peter worked for Hoffman La Roche in Nutley New Jersey as an engineer in their audio visual division for over 40 years and retired from there in 2013.

While in Vietnam he met Karen Donovan through the mail as pen pals.  As she puts it they love story started with a .29 cent stamp. They wrote letters back and forth to each other during Peter’s time in Vietnam and eventually met when he came home.

On June 9th, 1973 Peter and Karen got married at Sacred Heart Church in Lyndhurst New Jersey.  For the first years of their marriage they lived in Ridgefield Park and then eventually settled down in Oakland in 1977.

Peter and Karen had their first daughter, Jennifer, on March 22, 1979.  On October 16th, 1981, their daughter Deborah was born.  Through the years the family enjoyed many wonderful vacations down the Jersey Shore, Florida, Walt Disney World and sights along the east coast.  Peter loved spending time with his family and also enjoyed swimming in the pool and hanging out in the backyard on the hot summer days.

In 2011 he gained a son that he always wanted when his daughter Jennifer married Matthew Post.  Matthew and Peter shared a bond of both being firefighters and Peter loved Matthew like he was his own.  Together they would talk about firefighting, sports and just about anything they could think of.  Peter was always there for his family and for Matthew too.

If you knew Peter you knew his favorite holiday was Christmas.  There was never a Christmas season that he wasn’t decorating, baking, listening to music, reminiscing about his parents at Christmas time and just enjoying his decorations.  He enjoyed having his family around the tree, opening presents and just spending time together.

In 1980 Peter joined the Oakland Volunteer Fire Department.  He was a member of Company 1 and still actively went to calls.  He loved being a firefighter and held many ranks within the department over the years.  He was a Lieutenant, Captain and Assistant Chief.  He would help run the open house for fire prevention, volunteer time at safety town, visit schools for fire prevention and help in the Memorial Day activities at the fire house.  He loved working on the antique apparatus and anything he could do to help at the firehouse.  If there was ever an event, meeting or emergency, Peter was there.  Peter’s time and dedication for the Oakland Fire Department showed in all that he did and he considered that his family as well.

Peter was many things but one of the things he was very proud of was being a grandfather.  On July 10th, 2012 Peter became a grandfather for the very first time when his granddaughter Emma Elizabeth was born.  Peter would spend hours at the hospital holding his grandchildren after they were born and loved playing with them when they would visit him at his house.  His granddaughter Carter Patricia was born on July 16th, 2013 and his grandson Samuel Peter was born on May 26th, 2016.  His grandchildren were always making him smile and laugh and he will always be their “POPS.”

Peter was a loving family man, dedicated firefighter, devoted father, grandfather, brother & son and so much more.  He was someone that would always be there for you in a moment’s notice.  Peter touched so many lives and we are truly heartbroken by this loss.  We will continue to treasure his stories that he told, the memories that we made with him and the love that he gave to everyone he knew.  Peter was one of a kind and we will miss him each and every day.