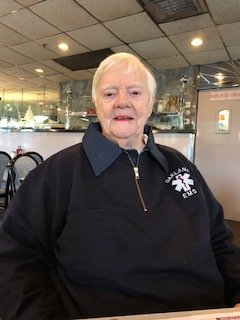 Constance Monks (nee Williams) 90, was a lifelong resident of Oakland until moving into the Holland Christian Home in North Haledon in 2007.

Connie is predeceased (1992) by her loving husband Arnold of 44 years. She is survived by her 3 children and their families, William and Karen Monks of Colorado and Arizona; David and Bonnie Monks of Montague; Barbara and Ken Hesse of Hasbrouck Heights. Grandsons Carson and Ethan Monks, and Kenneth and Charles Hesse; and brother Lee Williams and his wife Karen of Wayne, PA.

Connie was a founding member of the Oakland First Aid Squad in 1954 and later in life was honored by the First Aid squad as a Lifetime Privileged Member. She also volunteered in Kurth Cottage at Valley Hospital beginning in 1983. Connie worked in Dr. David Perkel's office in Oakland for many years and also at Dr. Harvey Weiss's office in Oakland.

In lieu of flowers, memorial donations can be made to the Oakland First Aid Squad, 285 Ramapo Valley Road, Oakland, New Jersey 07436, in memory of Constance Monks.

Share Your Memory of
Constance
Upload Your Memory View All Memories
Be the first to upload a memory!