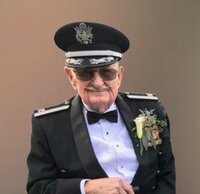 Col. Leigh Kent Lydecker, Jr., (known as Colonel), 97, of Oakland, NJ, passed away peacefully with family by his side on May 11, 2022. Leigh was born on April 2, 1925, in his family's farm house in Maywood, NJ, to Col. Leigh Kent Lydecker, Sr. and Dorothy Fisher Lydecker. His years of service started early; Leigh was active in the Boy Scouts and achieved the rank of Eagle Scout (his first merit badge being in beekeeping). He was later drafted into the U.S. Army on his 18th birthday, but was able to get a deferment until July, so he could graduate from Bogota High School in June of 1943. A highly decorated war hero, Leigh went on to serve his country for 37 years, even participating in the famed Battle of the Bulge. He was deeply proud to be of service and to be part of the “Greatest Generation.” Before entering World War II, Leigh received training in field artillery, then sailed to England in January,1944, to prepare for the invasion of Europe. His unit arrived in Normandy's Omaha Beach on D-Day plus 7, was assigned to the 190th Field Artillery Battalion, and saw action in France, Belgium and Germany. Upon his arrival at the Siegfried Line, he was assigned to the 692nd Tank Destroyer Battalion. After the Battle of the Bulge, Leigh was assigned to the 104th Infantry "Timberwolf" Division. He was on the front lines for an incredible 321 days and received the Bronze Arrowhead for the Normandy Invasion, five battle stars and the Combat Infantryman Badge. After returning home, Leigh attended Stevens Institute of Technology, in Hoboken, NJ. He graduated in 1951, with a degree in Mechanical Engineering and a commission as Second Lieutenant in the Air Force, serving two years in the Philippines. Later, Leigh was recalled to active duty during the Korean War, and afterwards, joined the Air Force Reserves. While in the Air Force, he received the Air Force Commendation Medal, the Armed Forces Reserve Medal with Cluster, the National Defense Service Medal, the Air Force Longevity Medal and the Distinguished Service Medal. Dedicated to service and reaching the top of his field, Leigh spent 33 years in the Air Force Reserves, before retiring as a full bird colonel (in the footsteps of his father). His lifetime of service was an inspiration to all who knew him. Leigh met his cherished wife, Jane, in 1953 when he was working as an engineer for Babcock & Wilcox Company in Buffalo, NY. He was on a job at the Niagara Mohawk Power plant where she was working as a Statistical Technician. That fortuitous meeting, resulted in a remarkable marriage that lasted 67 years. It was a true love story, with Jane passing just 18 hours after Leigh. In 1966, the couple moved to their home in Oakland, NJ, where they remained for 56 years. Everyone was welcome and Leigh loved greeting friends and family with old fashioned and conversation. New neighbors were invited to the annual clambake, so everyone on Long Hill could get to know each other. Leigh was highly respected by his family, friends, church and community, for his integrity, generosity, kindness and selflessness. He took up beekeeping again in his early 80’s and became one of the oldest beekeepers in NJ, tending meticulously to his hives and serving as a mentor within the community. He was also an enthusiastic and skillful gardener. Active and adventurous, he loved playing tennis and golf and jaunting around the world with Jane. He enjoyed cruising through the United States and Prince Edward Islands in his Winnebago, where he met countless new friends along the way. He also enjoyed his summer home in the Adirondacks (known as “Deerland”) where he had another garden and was constantly working on renovations and multiple projects. Deeply involved in his local community and a man of faith, he was an active member of St. Alban's Church, High Mountain Golf Club, Republican Club, Holland Society of New York, Chi Phi Fraternity, American Legion and VFW. He served on the Board of YMCA of Hackensack, Flood Control, Environmental Commission, Planning Board, FEMA and many other organizations and charities. Leigh is survived by his wife, Jane; his sons, Leigh III, Mark and daughter, Katharine (Edward); six grandchildren, Alicia (Ben), Heather, Leigh IV (Lauren), Stacy, Mark, Jr. and Karlee; two great grandsons, Isaiah and Silas; and many nieces, nephews and cousins. He was preceded in death by his parents, Leigh and Dorothy; siblings, Louise (William), Katharine (Alfred), William and Gerrit (Brenda); and sister-in-law Alberta (William). A Celebration of Life for Leigh and his wife, Jane, will be held on Tuesday, June 28, 2022 at 11:00 a.m. at St. Alban's Episcopal Church in Oakland, NJ. The interment will be at the Long Lake Cemetery in Long Lake, NY. In lieu of flowers, donations can be made in his memory to the Wild Center, www.wildcenter.org or the Long Lake Association, www.longlakeassociation.com.