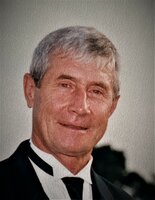 Eugene Nicholas “Gene” Prebola passed away peacefully on December 10, 2021 surrounded by his family. His stoic strength shone through in his final days, despite a long battle with heart disease. Gene was born on June 30, 1938 in the Bronx, New York, the middle child of Andrew Prebola and Sophie Guzik Prebola. He grew up in West New York, New Jersey with siblings Helen Prebola Pursley and Thomas Prebola. He attended Memorial High School, where his passion for football took root. During his four years playing for Memorial, the team never lost a game. His talent did not go unnoticed. Despite breaking his leg in the third game of his senior season, Gene received a full football scholarship to Boston University where he earned his B.S. in Health & Physical Education. Gene thrived as a two-way starter for the Terriers, earning the moniker “the best end in the East” by coaches and opponents. He was named All-New England first team and All-East honorable mention. A highly versatile athlete, Gene also lettered for the 1957-58 Terrier basketball team. The culmination of his college, and subsequent professional career, was his induction into the Boston University Hall of Fame in 1991 and the Hudson County NJ Hall of Fame in 1997. Gene was drafted by both the NFL and AFL in 1960. He chose to pursue a career in the start-up AFL with the Oakland Raiders where he caught the game winning touchdown in the franchise’s first win ever. He played one season with the Silver and Black before being traded to the Denver Broncos, where he spent the next three seasons as a tight end wearing his favorite number, 88. Football wasn’t the greatest love of his life. That title goes to his wife Patricia “Pat/Patty” Fix Prebola. The two met at the Jersey Shore in 1963 and married on January 9, 1965 in Eastchester, New York. Pat and Gene moved to Paramus, New Jersey and later found their “little slice of heaven” in Sparta, New Jersey where they raised their children, Karen Prebola Lavin, Kenneth Prebola, Keith Prebola, and Kristopher Prebola. Gene’s first teaching and coaching job was at Snyder High School in Jersey City, New Jersey, but he spent most of his career at Indian Hills in Oakland, New Jersey. During his 32-year tenure as a Health and Physical Education teacher he earned his Master’s Degree from Montclair State University. He also coached multiple sports including football, indoor and outdoor track, and wrestling. His big presence and bigger heart made a lasting impression on his students. Wherever he traveled—from coast to coast—there was always someone who recognized “Mr. Prebola.” Gene’s coaching wasn’t limited to his students, he was active in his children’s athletic pursuits and was the biggest, and often loudest, fan at his children’s and grandchildren’s sporting events. He was an avid golfer who loved playing with his original foursome—his sons—and later with his grandchildren. He enjoyed travelling the country, especially attending NFL conventions and yearly vacations to Kiawah Island, South Carolina with his devoted family. He is survived by the love of his life, Pat, as well as his four children and their spouses—Karen and her husband Sean, Ken, Keith and his wife Susan, Kris and his wife Jennifer, and nine grandchildren—Beth, Eric, Michael, Matthew, Luke, Andrew, Ava, John, and Nicholas. In lieu of flowers, contributions may be made in Eugene Prebola’s memory to the Gagnon Cardiovascular Institute c/o the Foundation for Morristown Medical Center, 475 South Street, 1st Floor, Morristown, NJ 07960. Donations may be made online at www.f4mmc.org. The family will welcome visitors between 10:00am and 12:00pm on Saturday, December 18, 2021 at Our Lady of the Lake Roman Catholic Church in Sparta, NJ. A funeral mass will follow at 12:00pm. Out of concern for the safety of family and friends, the family strongly encourages that everyone attending the service and funeral be fully vaccinated.