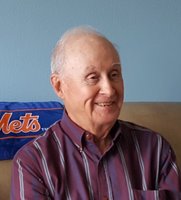 Our dearly beloved husband, father and grandfather, Gilbert A. Godwin entered into eternal glory on April 25, 2020. Born in 1933 in Orange, NJ to William and Martha (Hagstedt) Godwin, Gil grew up in Bloomfield, NJ. His mother brought him faithfully to St. John’s Lutheran Church, and his faith was something that stayed with him and guided him throughout his life. Walther League youth group activities in worship, service, and recreation provided dear friends, developed leadership skills, and guided his life for honesty, hard work, and care for others. This made Gilbert the man we all knew and loved. There he met his sweetheart Janet Mueller, and they married in September 1960. In 1962 they moved to Oakland, NJ and raised their children, Tina and Brian. They enjoyed 55 years in Oakland, until they moved to the Cedar Crest community in Pompton Plains, NJ in 2017. Gil earned a BS in Electrical Engineering from Newark College of Engineering (now NJIT) in 1955. He started his 1st job as an engineer in the Research & Development department at Howe Richardson Scale Co, in Clifton, NJ. In 1956, he was drafted into the US Army and served 2 years, teaching in the Engineering Corps in Virginia. Gil earned an MS in Electrical Engineering from Stevens Institute, taking night classes. Gil was truly loyal and a great problem solver. He only had two employers in 44 years: first, at Howe-Richardson, and then with Electro-Nucleonics Inc in Fairfield, NJ. At ENI (later Pharmacia), he was a Project Manager and electrical designer of early clinical blood analyzers. He was able to put complex things in simpler terms. Gil was a faithful member of Messiah Lutheran Church of Oakland for 45 years. As an active leader, he served with property maintenance and as secretary, treasurer and president. He loved pitching on the church’s softball team (1984-93) until he was 60. Gil’s other interests included traveling with Janet and family, reading his Bible, Suduko puzzles, gardening and volunteering with Meals on Wheels, the Center for Food Action in Mahwah, NJ and Tres Dias of Northern NJ. Gilbert was a quiet, unassuming and truly gentle man. Trying to pick the qualities that best describe him, they sound a lot like the famous list: “the fruit of the Spirit is love, joy, peace, patience, kindness, goodness, faithfulness, gentleness and self-control.” He clearly loved God and His creation, his wife, family, church family, and community. Well done faithful servant; welcome home. He is survived by his beloved wife of over 59 years, Janet (Mueller) Godwin, their daughter Tina Reese and her husband Wayne of Bedminster, NJ, and their son Brian Godwin of Manchester, CT and his fianceé Bonnie Keppner. His three loving grandchildren Megan, David and Peter Godwin, of Glastonbury, CT, are all his pride and joy. He is also survived by his sister Marion Snedecor of Utah (age 101!), his sister-in-law Linda (Mueller) Dufresne and her husband John of Tampa, FL, sister-in-law Anne Mueller of Wayne NJ, as well as many cousins, nieces, nephews, and his faith family. Along with his parents, he was predeceased by his sister Doris Galloway (NJ) and brother Raymond Godwin (MD). In lieu of flowers, Gilbert would be honored for donations to go to Messiah Lutheran Church in Oakland, NJ. Graveside prayers will be private for immediate family. A memorial celebration for Gilbert will be announced in the nearest allowable future. We are grateful for the wonderful care he received from the nurses and staff at Mountain View Gardens at Cedar Crest, who were true heroes and angels for Dad when he needed them the most, and for the funeral services of the Oakland Memorial Home.