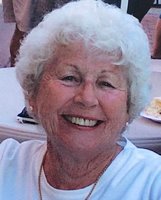 Jane W. Moris, 86, of Mahwah, NJ, entered the gates of Heaven on April 3, 2020. Born January 23,1934 in Evanston, IL, Jane was a loving wife, mother, grandmother and great-grandmother. She was loved by all. Jane, and her husband Bob, moved to New Jersey in 1967 from Milwaukee, WI and raised their family in Oakland, NJ. She was a homemaker and later became an administrative assistant at Ramapo College of New Jersey, working in the Registar’s office until she retired. She enjoyed helping out the college students and was well remembered there, year after year. She always remarked that the students kept her young at heart. Jane also loved the Jersey shore, having grown up in the Midwest, the ocean was always a favorite vacation spot for her. She could be found in the surf in Long Beach Island up until a few years ago. Her one true love, however, was spending time with her family, especially her grandchildren. Jane was predeceased in May 2016 by her husband of 65 years, Robert Moris. She is survived by her brother James Ward of Evanston, IL., and her four children; Susan DeSotle of Oakland, NJ, and her husband George, Robert Moris of Kinnelon, NJ, and his wife Laurie, Carol Krass of Ringwood, NJ, and her husband Mark, and Pamela Moris of Montreal, Canada. Also surviving are her three grandsons and seven granddaughters as well as two great-grandsons and seven great-granddaughters with an eighth on its way. Due to the Covid 19 pandemic, a private cremation was held by the family. A celebration of Jane’s life will be held in late summer, at which time we will announce the date.