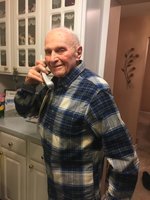 William Joseph Donohue, born February 3, 1926, in Paterson, NJ, passed away peacefully February 6, 2020, at the age of 94. One of five children, along with siblings Joseph, Thomas, John (Jack) and Theresa (Terry), born to Joseph and Sophie Donohue, and raised in Prospect Park, NJ, Bill graduated from the Paterson Vocational and Technical High School. He worked as a machinist for the Wright Aero Corporation before following the lead of his three brothers and enlisting in the Navy in 1944, serving on the USS Clinton. After his service, he joined the New Jersey State Police in 1951. During this time, he met his wife, Jennie Arena. Bill and Jennie were married in 1957 and settled in Oakland, NJ, where they raised their four children. After leaving the State Police, he was a member of Teamsters Local 560 and worked in the trucking industry. He had a natural knack for mechanics, known to be able to fix any vehicle, a trait that he passed down to Bill Jr. He was an avid golfer, particularly with his brother Jack as his partner. He loved getting out in nature, walking and hiking. His best partner, however, was his steadfast and wise partner, Jennie, in notorious games of rummy against his brothers and sisters. He retired at 73 from driving to become a full time grandfather to his grandsons, proudly enjoying every minute of being a part of their lives as they became young men. He was a founding parishioner of Our Lady of Perpetual Help Roman Catholic Church in Oakland, NJ, and an active parishioner up until days before his passing. He also served in the Knights of Columbus. Strong in his faith, always cheerful and grateful for another day, he enjoyed most of all spending time with family, friends, neighbors, and acquaintances… talking, connecting, and telling wondrous stories of his adventures. He is survived by his loving wife of 62 years, Jennie (nee Arena), his devoted children William Jr. of Colorado and wife Arlene, Brian of Georgia, Michael of South Carolina and wife Denise, Colleen D’Angiolillo of Rockaway and husband Keith; Beloved grandsons Michael Donohue and Aidan, Ian and Colin D’Angiolillo; and especially, a host of exceptional and loving nieces, nephews, grand nieces and nephews all of which held such special places in his heart. His blue eyes, smiling face, and many storied will be sorely missed by all.